Everyone is doing everything, but who will do everything the best?

Hi there friends we just read this news from PC GAMER : https://www.pcgamer.com/valve-is-getting-into-livestreaming-amazon-is-making-games-and-discord-is-selling-them/?utm_content=buffer5a7aa&utm_medium=social&utm_source=facebook&utm_campaign=buffer_pcgamerfb

This is what we found -
By Tyler Wilde

Valve launched livestreaming website Steam.tv last week, broadcasting The International 2018 in a coy jaunt into Twitch's territory—not a brazen incursion yet, but a casual statement of intent. Meanwhile, while Valve has been fairly quiet about its game development projects outside of Artifact, Twitch-owner Amazon showed off one of its new games at Gamescom 2018, an MMO called New World. Discord also took a stroll into Valve's neighborhood recently, announcing that it's going to start selling games within its chat client. Valve replied with a new Steam chat client that's awfully Discord-like.

What should we make of the end of specialization, where your chat client sells you games, your streaming website develops games, and your games retailer streams games? Will Twitch make Half-Life 3? Will Gabe start a weekly livestreamed show called Knife Life? We can't know, but for now, here's what we do know about each of these company's ventures into each other's territory, and how much potential we think they have. 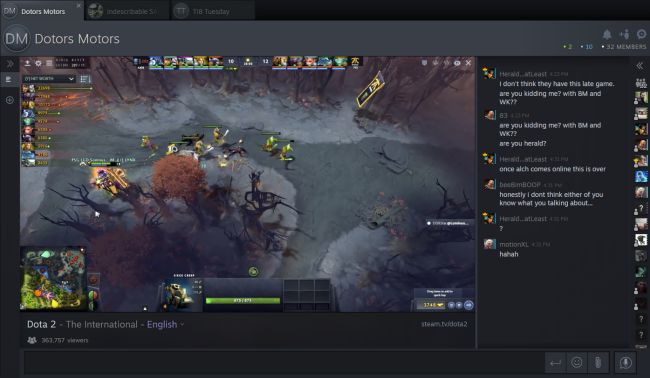 There isn't much to Steam.tv right now, but you may have noticed that livestreams—which have been a tertiary feature on Steam for a while now—are starting to appear on game pages in the Steam store. Valve clearly isn't just playing around, and if it really wants to unseat Twitch, it has a lot going for it.

One, Valve's streaming tools are built into Steam, the platform millions already use to buy and play games with. Two, Valve says it's going to open up an API for developers so that they can customize the Steam.tv player for their games in the same way the Dota 2 test streams marked team fights on the timeline. That would be great, and Steam.tv's player is already better than Twitch's because you can scrub backwards if you missed something rather than having to find the VOD-in-progress (why is that feature still not on Twitch?). And three, Valve knows something about making money off its users while they make money off of each other—eg, in the Steam Marketplace—which is the kind of model it needs to run a big time streaming service. You're never going to attract the Ninjas of the world if they can't make money.

Though I haven't actually tried it yet (the only thing streamed on Steam.tv so far has been The International), I also like that I can log into my Steam account and invite my friends to a group chat. Twitch's free-for-alls create some fun, spammy moments—I enjoyed the cries of 'VAC!' whenever Bob Ross would turn an apparent mistake into a lovely mountain during the marathon—but being able to watch esports with friends rather than with every asshole on the internet sounds appealing, too.

Amazon stopped development of its 4v4 sports game, but its other two announced projects (aside from The Grand Tour, which I've got little to say about) continue onward: sandbox MMO New World and competitive third-person competitive action game Crucible.

We don't know a whole lot about Crucible. The vague blurb makes it sound slightly similar to SOS or Hunt: Showdown, but it doesn't match up with anything precisely—it's a 12-player game in which the last player standing wins, and we're meant to make and break alliances with other players along the way as we fight on a "lush alien planet" with "unique weapons and abilities." There's also a possible 13th player who can livestream and "create events." It sounds purpose-built for exciting on-stream moments, though I'm not awed by the "game of trust and betrayal" pitch. What'll probably make or break Crucible is how inherently fun it is to shoot and move through its jungle. Tense social dynamics are possible—Sea of Thieves does this well—but players have such a habit of disrespecting a designer's vision that the claim won't hold much weight until we see it for ourselves. The big, entertaining personalities that make social games fun are rare, with most players being quiet, timid, matter-of-fact, chill, or assholes. It takes a special something—what Dead by Daylight has, say—to make it work.

New World is more of a known quantity, as Samuel played it at Gamescom 2018 and will have a preview coming soon. It's described as a sandbox MMO that takes place in a "savage and arcane 17th century world." In other words, it's the late European Renaissance (swords and guns exist side-by-side) but there are ghosts, or something. The basics are already in place: At Gamescom, Samuel chopped down a tree, swung a sword, fired a gun, and raided a base.

The bullet points are ones we've seen on the Kickstarter pages of a lot of upstart MMOs of late, many of which are taking after EVE a little: guilds, claimable territory, settlement building, farming, classless progression, elaborate crafting. The primary difference is that Amazon is as far from a small, scrappy Kickstarter team as you can get. It's a behemoth that can throw money at this huge endeavor, which gives it some advantages in terms of the scale and refinement it can achieve. As other big developers have steered toward 'live games' like Destiny 2 and Anthem as opposed to more traditional MMOs, it is curious to see Amazon take on the fantasy sandbox genre as one of its debut games.

At the least, with its massive existing server infrastructure, Amazon's MMO may be the first ever to have a smooth launch. 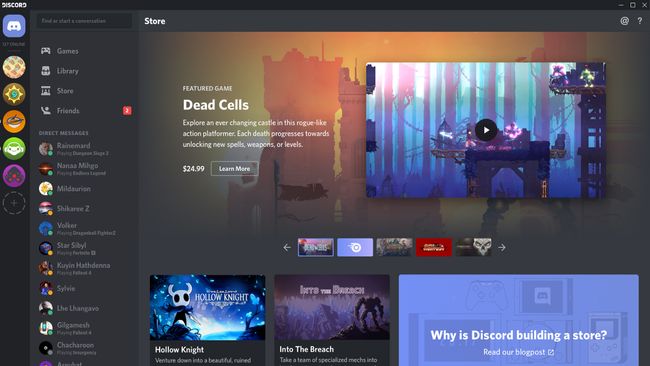 A new 'Discord Store' tab is currently in beta testing for the chat software. Rather than trying to take on Steam or GOG, Discord plans to hand-pick a small selection of games to sell, which currently appears to include Into the Breach, Hollow Knight, Dead Cells, Pillars of Eternity 2: Deadfire, Banner Saga 3, and Frostpunk. There'll also be a selection of games available to Nitro subscribers at no extra cost, such as System Shock Enhanced Edition and Super Meat Boy.

Those are all good games, but they're also all singleplayer games. That's a little surprising. My expectation is that Discord will do everything it can to court quirky multiplayer games such as Shotgun Farmers, Rocket League, Ratz: Instagib, Brawlhalla, or For the King—games that are great for an evening session in voice chat. If it can find a new hit multiplayer game to make one of its 'First on Discord' exclusives, anyone not sold on using Discord as their voice and chat client may be persuaded by the fear of missing out. Currently, we know that Bad North, another singleplayer game, is signed up for that 90-day PC exclusivity arrangement (it's out now on consoles).

The Discord client will also be able to launch non-Discord games, much in the same way non-Steam games can be added to your library there. So while it won't necessarily have a massive selection for sale, the hope appears to be that we'll be satisfied organizing our collections under one roof that isn't Steam.

As Valve improves its own chat functionality and gets into streaming, it may be a tough fight, but Discord isn't a small fry. Most people I know exclusively use Discord for voice chat these days, and I'm the same way. Years of issues with Steam's voice chat have soured me on it, however well it may work now, and in-game comms are almost always spotty, so I only use them when needed (eg, if there's proximity chat or I don't know my teammates).

With 150 million users, the Discord Store will at the absolute minimum introduce a bunch new folks to some worthwhile indie games, but if all goes well Discord could develop into a giant-sized company over the next five years. At that point, maybe Discord will start developing games (where it started), Amazon will make a chat client, and Valve will start selling audio books.

Here is the link from where: https://www.pcgamer.com/valve-is-getting-into-livestreaming-amazon-is-making-games-and-discord-is-selling-them/?utm_content=buffer5a7aa&utm_medium=social&utm_source=facebook&utm_campaign=buffer_pcgamerfb